This summer season bring your family to a fun outdoor program series, 18th Century Living. Professional craftspeople and reenactors will be on hand at the Wyman Tavern Museum to demonstrate the art of ‘doing history.’ 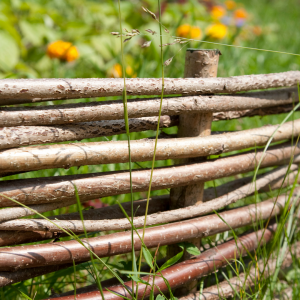 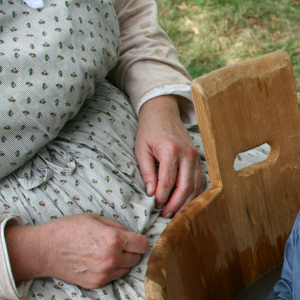 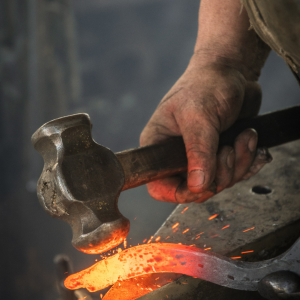 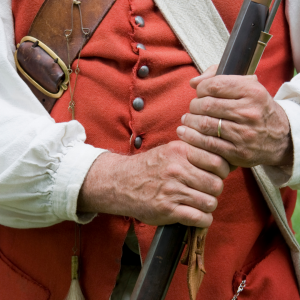 By the time Keene was becoming a permanent settlement in the mid-18th century, many different community members were working with wood to meet the daily needs of their households and the town. On May 22nd, three craftspeople will be at the Wyman Tavern to introduce the general public to traditional woodworking arts.

Meg Kupiec will demonstrate chair caning and splint-woven seating. Wayne Miller will demonstrate wood carving and planing. And, Kathy Schillemat will demonstrate how to make a wattle fence using locally harvested tree saplings. Wattle fencing has been used as an enclosure for gardens and livestock from ancient times.

How did men and women from the Monadnock region dress during the the late 18th century? What colors were available for cloth? What’s it like to meet a real potter? Come to the Wyman Tavern and learn more about the craftspeople who made everyday products for people 250 years ago.

Emilia Whippie Prior and JJ Prior will portray 1770s Keene residents, and siblings, Mary and Abner Sanger. They will talk to visitors about getting dressed in the 18th century and the construction of clothing. Rebecca Whippie will demonstrate how to dye wool in a variety of colors for producing textiles like bedding and clothing. Janice Steinhagen will demonstrate how to weave cloth tape, a material used in a variety of textiles during the 18th and 19th century. And, Erich Steinhagen will demonstrate using his pottery wheel.

At the turn of the 19th century, specialized craftspeople like tinsmiths, blacksmiths, and pewterers played a vital role in the success of a community like Keene. Materials made of iron, pewter and tin were necessary for tools and equipment, home goods, hardware, transportation etc.

Rogers’ Rangers began in 1755 as a company of provincial force in British North America; the latest in a long line of New England Ranger Companies dating back to the 1670s. Rogers’ received his commission from King George. He was very active in defense of the Colonies from the French. He chose to remain loyal to the Crown, during the American Rebellion. He was not trusted by the English, as he was American-born, he was not trusted by the “Rebels” as he remained a Loyalist. He was commissioned during the War of Independence Loyalist Forces: to raise up the Queen’s Rangers and later the King’s Rangers. Descendants of these American Loyalist forces are still recognized in Canada today.

The Rangers will be in Garrison, so no battles. They will demonstrate camp-life: accouterments for scouting, leatherwork, gun repair, etc. as well as mustering and practice drills. There will be some practice firings. As a British unit, of course, there will be a British flag proudly displayed. (Everyone in the Grants was British Citizens at this time! )  Robert Rogers’ Ranger Commission was active c.1755-1763. Many of the Rangers were enlisted from Monadnock towns, including Nutfield, Londonderry, the Monadnock Grants:  Peterborough, Dublin, Nelson, the Ashuelots: Swanzey (Lower Ashuelot), Keene (Upper Ashuelot), Northfield: later including Hinsdale, Fort Dummer, Vernon VT, Putney VT, and the 4 Connecticut River Grants: #1: Chesterfield, #2: Westmoreland, #3 Walpole and #4 Charlestown. (At this time, all of Southeastern NH was thought to be part of Massachusetts…) 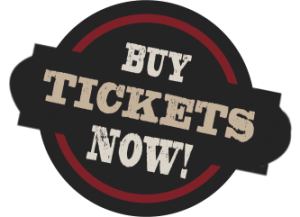 *All events require tickets for timed admission. Please arrive at your scheduled time, attendees will have 1 hour to attend the event and visit with the demonstrators.

$10.00 per adult and free admission for Children 18 and under

The Historical Society of Cheshire County is supported in part by a grant from the New Hampshire State Council on the Arts and the National Endowment for the Arts, C&S Grocers, and the Putnam Foundation.

By purchasing a ticket from the Historical Society of Cheshire County you agree to abide by these policies:

Masks are required for all visitors at all times.

Wash hands and use hand sanitizer.

6′ social distancing is required at all times.

Stay home if you are feeling sick or symptomatic.

Staff will be performing self-health checks before coming into work.