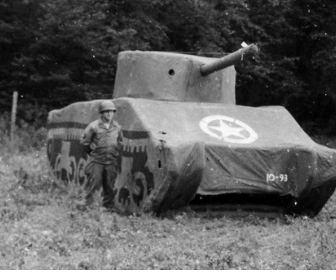 During World War II, a hand-picked group of American GI’s undertook a bizarre mission: create a traveling road show of deception on the battlefields of Europe, with the Nazi German Army as their audience.  The US 23rd Headquarters Special Troops used inflatable rubber tanks, sound trucks, and dazzling performance art to bluff the enemy again and again, often right along the front lines. This little-known unit’s knack for trickery was crucial to Allied success in World War II, but their top-secret mission was kept quiet for nearly 50 years after the war’s end.

Using archival footage and dozens of still photographs, paintings, and sketches created by soldiers, The Ghost Army tells the extraordinary story of these incredible battlefield illusions and the talented young men, many recruited from art schools across the country, who used their creativity to ultimately save lives.