As we look back now, more than sixty later, it seems almost inevitable that Cheshire County’s worst forest 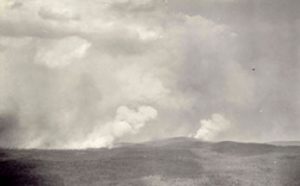 Fire moving through the forested landscape of Marlow and Stoddard

fire ever was about to occur in April of 1941.  During that month the state had experienced the highest average temperature and lowest average rainfall of any single month in seventy years.  The forests were clogged with blown down timber as a result of the 1938 hurricane.  Numerous crews had set up saw mills to remove the timber.

It was at one of these saw mills in the northern section of Marlow that the fire was accidentally ignited on the afternoon of April 28.  The fire quickly raced southward, burning the full length of Marlow and into the town of Gilsum.  The next day the wind shifted and the fire spread rapidly toward Marlow village.  Ten local fire departments worked to save the village as the fire raced through dry fields and up to the houses themselves.  It burned all around the homes isolating the people of Marlow, but the village was saved.
Fred Jennings, the watchman in the lookout tower on Pitcher Mountain in Stoddard, made reports on the fire’s progress as it raged into Stoddard.  He finally fled down the mountain as the lookout tower burned behind him.  The village of Stoddard was saved as rowboats were placed along the road and filled with water as a means of transferring water up the road to the fire. It continued to burn into April 30th, but the wind died down and snow and rain began to fall, aiding the crews in finally extinguishing the blaze.
In just over two days many homes and 27,000 acres had burned.  Forty-eight percent of Marlow’s land area, 42% of Stoddard, and smaller portions of Washington and Gilsum had been devastated.  Although many were left homeless, not one person was injured in the blaze, including the 2,000 men who had converged on the towns to fight the great Marlow-Stoddard forest fire.