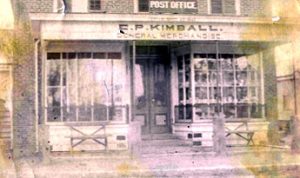 Edward P. Kimball was born in Hillsborough, New Hampshire in 1820.  At age eleven he was left dependent upon himself to earn his living after his father passed away.  Young Kimball took jobs doing farm chores and working as a clerk in a general store.
In 1836, at the age or sixteen, Kimball moved to the town of Troy as an apprentice in the hat making trade.  During the next half century he became one of the most respected citizens of the town.  In addition to hat making, Kimball was involved in a great variety or businesses over the years.  These included a tin shop, brick yard, broom factory, picture frame business, and a general store that he ran for many years.  Perhaps his most unusual business, however, was the manufacture and sale of a variety of medicines.
Kimball had little formal education, but the mid nineteenth century was a time when the success of a medicine business had more to do with a person’s ability as a salesperson than with his medical training.  He made at least three medical products that he sold from his store in Troy.  They were Kimball’s Jaundice Bitters, Anodyne Toothache Drops, and Hair Renovator.  The hair renovator was guaranteed to restore and beautify the hair.  The toothache drops were labeled as “an immediate and perfect cure.”
Kimball’s medicine business was apparently as successful as his other business undertakings.  He purchased medicine bottles from the glass factories at Keene and Stoddard and had ten travelling salesmen on the road selling the medicines.  It is not known when the medicine business ceased, but Edward P. Kimball is known to bottle collectors across the country because of the highly collectible antique medicine bottles that bear his name.