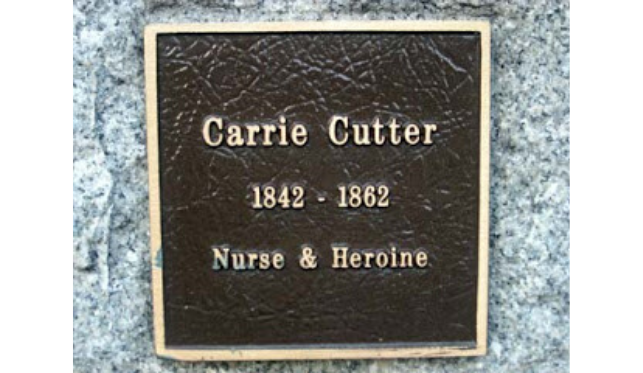 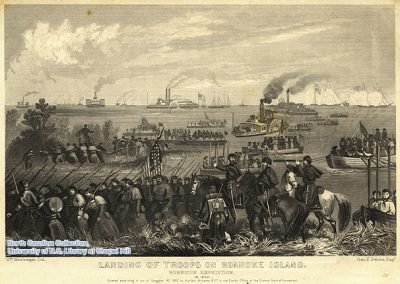 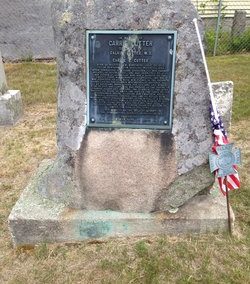 Carrie E. Cutter has been described as the ‘beautiful and accomplished daughter’ of Dr. Calvin Cutter of Jaffrey, NH.  She was born in 1842 and attended private schools, including Mount Holyoke College, where she learned languages such as German. Cutter often assisted her father when he visited patients.  By the time the Civil War broke out, the Cutter family had relocated to Warren, MA.

While her father was serving in the 21st MA Infantry as a surgeon, 19-year old Carrie Cutter was busy organizing ladies aid societies to produce bandages and furnishing hospitals with the much-needed medical supplies.  When Dr Cutter was ordered to sail with Burnside’s expedition to Roanoke, VA, she petitioned the government to allow her to accompany him. She sailed on the troop ship as her father’s nurse.

As battles raged on in Virginia, Carrie worked to care for the wounded.  Once after arriving ashore from the ship to offer assistance to wounded soldiers, Carrie and her father were met with three German soldiers who couldn’t speak English.  Because of her former schooling in German, Carrie was assigned to the three men who began to recover under her care. Unfortunately, the long hours and little self-care caused her to enter a weakened state until she finally died of typhoid fever in March 1862.

General Burnside ordered that Carrie Cutter be buried with military honors.  When the National Cemetery was established in New Bern, NC, the Secretary of War directed that Carrie be buried with the other soldiers.  New Hampshire’s Carrie Cutter was one of the first women to give her life in the Civil War and one of the first to be buried in a National Cemetery.  Her name is included on the Roll of Honor in the Library of Congress in Washington, DC.

Later, the famous nurse Clara Barton would write a poem in remembrance of Carrie Cutter.