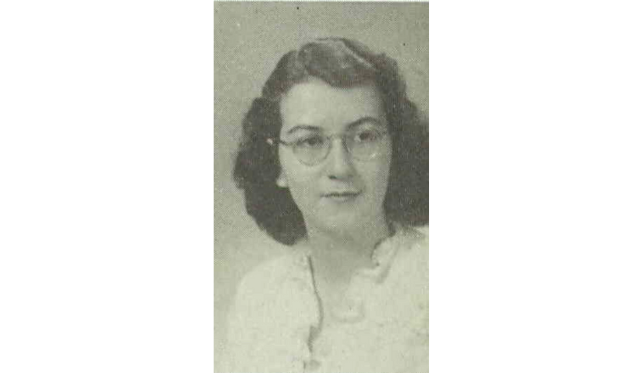 A Red Cross volunteer during the Korean War, national staff member of the YMCA, and the founder of “Jane’s Kids”.

On May 12th, 1928, Jane Seaver Kirk was born in Keene, the second of Ruth Mertella Seaver and Howard Wesley Kirk’s three daughters. Jane’s parents were both active community members and involved in charitable activities. Jane’s mother was the first female chairman of the Keene Board of Education, a co-author of Upper Ashuelot: A History of Keene, and the 1979 winner of Keene State College’s Alumni Achievement Award.

Jane attended Keene High School, graduating in 1946. In high school, she was on student council, a writer and editor of the school newspaper, the secretary and president of the Red Cross, the secretary of the National Honor Society, the secretary and treasurer of the Dramatic Club, and the yearbook editor. After high school, Jane went to Duke University where she majored in Sociology. She continued her involvement in charities by chairing the YWCA volunteer efforts at a Duke-owned facility for low-income children.

In 1950, Jane answered the Red Cross’s calls for women volunteers to go to Korea. She trained in Washington DC and then flew to an Air Force base in Japan. Jane was assigned to the 361st Station Hospital in Tokyo, a 1,000 bed hospital serving American soldiers and their families.

After a few months, Jane was sent to the 3rd Bomb Wing in Kunsan, Korea (near the Yellow Sea). There, the women were expected to serve coffee and doughnuts and to run activity programs such as games, talent shows, and holiday celebrations. Following her time in Kunsan, Jane transferred to Puscan, then to a US Naval Hospital in New York City, and then back to Korea. On her return to Korea, she independently organized a clothing drive for local Korean orphans with her mother who was still in Keene.  Her mother Ruth collected over 5,000 pounds of clothing in Keene and persuaded the Kingsbury Manufacturing Company to build the crates needed to ship the heavy care packages.

When Jane finally returned to the US, she earned her Master’s of Science in Community Organization and Group Work from Springfield College in 1956. She promptly accepted a position as the Assistant Program Secretary at a YMCA in New York City. In 1958, she took a position as the Director of the Red Cross Center in Chaumont, France. The following year she held a similar position in Kenitra, Morocco, then returned to Evreux, France.

In 1960, Jane began her 33-year career with the Red Cross—spending the later 20 years as a national staff member. She worked at YMCAs in Rhode Island, Nebraska, New Jersey, Pennsylvania, New York, Massachusetts, and Illinois at various times. Jane started the first program for the American military in a downtown YMCA. She was the first female member of the Middle Atlantic YMCA. In her work for the Capital Associates branch of the YMCA, Jane raised $33 million from 13 different capital fundraisers, and when she was the Deputy Director of the International Group of the YMCA, she raised over $1 million in her first year (the previous year $60,000 was raised).

In 1993, Jane retired and moved back to the east coast. She bought a house in Munsonville on Granite Lake in 1996. Jane served on the Nelson Board of Selectmen for 12 years and was active in countless local and national charitable organizations. She was a member of the American Association of University Women, the Ashuelot Chapter of the Daughters of the American Revolution, the Association of YMCA Professional Directors, Alice Circle Monadnock Family Services, the Keene Rotary Club, and countless other organizations. In her work for the Rotary Club, Jane established a program, “Jane’s Kids” to supply needy children with clothing for school. For this, she was named a Paul Harris fellow—the highest honor given by the Rotary Club.

On May 22nd, 2018, Jane Seaver Kirk died at the age of 90. She is remembered for her lifelong dedication to public service and aid to children around the world.