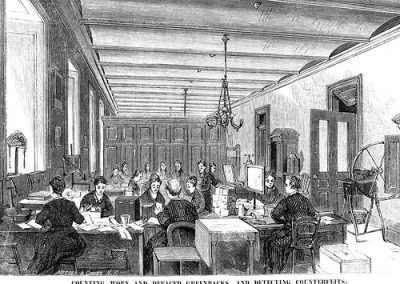 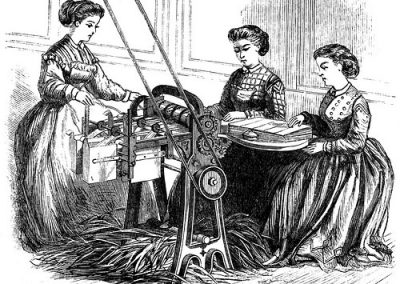 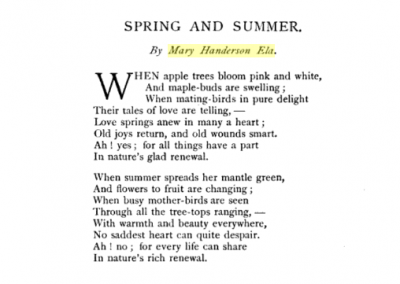 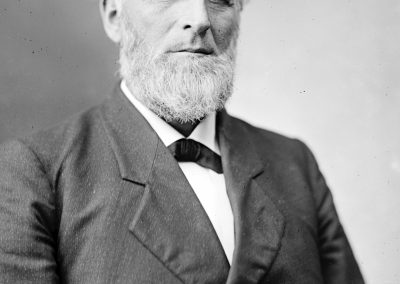 Mary (Handerson) Ela was born on May 27th, 1835 to Phineas and Hannah Handerson in Keene, New Hampshire. Her father, Phineas Handerson, was one of the leading lawyers who practiced in Cheshire County at the time. Mary became one of eight children in the family having six sisters and one brother. In 1860-70, Mary assisted her sisters Esther and Annie in running their young ladies school in the Handerson home on Washington Street in Keene. But ultimately, this was not the path Mary Ela wanted to continue. She started to search for something else, and the opportunity soon presented itself with the start of the Civil War.

During the Civil War, the United States Treasury Department began to hire women to trim and cut its new “greenback currency.” This initiative was launched by Treasurer Frances E. Spinner in 1861. By the end of the first year, seventy women were working for the US Treasury.

Mary Ela entered the department in 1870 and worked there for about a decade. On October 2nd, 1880, she married Jacob Ela, former congressman and 5th auditor of the US Treasury. The Handerson family most likely knew of Ela as a congressman from Rochester, New Hampshire. Jacob had once launched an investigation into fraud at the patent office of the Interior Department and had demanded an end to all railroad subsidies. He and his first wife Abigail were well-known NH abolitionists, temperance supporters, and suffragists from the 1840s through the 1870s.

Together Mary and Jacob Ela lived in Washington, DC for the next four years. Jacob died in 1884 and Mary moved back to Keene, New Hampshire to continue supporting the women’s suffrage movement. In 1887, she became the chairman of the executive committee of the New Hampshire Women’s Suffrage Association. During her tenure, the Association’s main goal was to spread word of the movement to more rural regions of the state and to push the state legislature to pass a suffrage amendment. While the movement had some support from congressmen and state representatives it was not enough to pass an amendment until 1919, seven years after her death. Throughout the late 19th century, Mary Ela had a passion for this work and followed in her husband’s footsteps; seeking justice and equality for all.

In the years following her husband’s death, Mary began writing and published at least one of her poems. In 1895, Mary Ela published a poem in New England Magazine entitled “Spring and Summer.” Her poem went as the following:

When apple trees bloom pink and white,
And maple-buds are swelling;
When mating birds in pure delight,
Their tales of love are telling,—
Love springs anew in many a heart;
Old joys return, and old wounds smart.
Ah! Yes; for all things have a part
In nature’s glad renewal

When summer spreads her mantle green,
And flowers to fruit are changing;
When busy mother-birds are seen
Through all the tree-tops ranging,—
With warmth and beauty everywhere,
No saddest heart can quite despair.
Ah! No; for every life can share
In nature’s rich renewal.

Mary Handerson Ela died on November 12th, 1912, at 77 years old. She was cremated and her ashes were spread in Rochester, NH, beside her husband. Mary Ela fought for equal rights for women and believed that every United States citizen had the right to vote. She continues to be an influential figure in the history of the New Hampshire Women’s Suffrage Association to this day. The voice of one woman, combined with the voices of many others, helped to shape the way that American society viewed women in the 20th century. And on August 26th, 1920, the United States ratified the Nineteenth Amendment which provided women the right to vote.