Opportunity to Travel Back to the Eighteenth Century

The Wyman Tavern Festival begins on Saturday, June 15, 2019 and continues into the 18th century. This time travel opportunity is being offered by the Historical Society of Cheshire County at its historic house museum, the Wyman Tavern, 349 Main Street in Keene. The festival is a family-friendly event with demonstrations of traditional crafts, music, dance, games, and performances by characters in 18th century dress. The festival runs from 10 am to 3 pm on June 15. Admission is $10 for adults, and free for kids under 18.

Jenna Carroll, the Historical Society’s director of education says the sights and sounds of the Wyman Tavern Festival will let your 18th century imagination run wild. She says, “I like seeing families engaging with each other rather than parents watching their kids or kids watching their screens. At the festival everyone has an opportunity to connect with the past and learn new skills. You can try your hand at spinning wool or cooperage or sewing rag dolls. Grandparents can come with grandkids.”

This year, the Wyman Tavern Festival has been able to expand the number of traditional craftspeople and personalities doing demonstrations, thanks in large part to a grant from the New Hampshire State Council on the Arts and the National Endowment for the Arts. C&S Wholesale Grocers is a major sponsor as well.

Richard Wright from Troy, New Hampshire will demonstrate blacksmithing, and Larry Leonard from Shrewsbury, Massachusetts will demonstrate tinning. Guests can watch Meg Kupiec from Walpole, New Hampshire do chair caning and her husband Wayne Miller do woodcarving. Renowned artist, scientist, and educator R.P. Hale will attend with his harpsichord. Ron Raiselis from Portsmouth, one of the few active coopers (wooden barrel makers) in the United States will demonstrate his craft.

J.J. Prior and Emilia Whippie-Prior from Westmoreland, New Hampshire will portray 18th century Keene residents Abner Sanger and Mary Stiles. A group of reenactors will portray the King’s Rangers, a Loyalist battalion of the British Brigade in the Revolutionary War. Col. Ebenezer Hinsdale’s Garrison Company will demonstrate day-to-day activities of 18th century village life. Jennifer Roy will portray an 18th century Irish washerwoman. The Sons of the American Revolution will attend as well.

A variety of performers will entertain as well as give people a taste of 18th century music and dancing. The Shape Note Singers of Nelson, New Hampshire will provide their incomparable form of singing which envelops the audience in harmony. There will be fife and drum, harpsichord, dulcimer, recorders, fiddle playing, contra dancing, and Finnish dancing. Jenna Carroll recalls the image of a group of people in a circle learning to dance. “I loved seeing people from different walks of life coming together to create a dance.”

Visitors can explore the Wyman Tavern Museum during the festival. Kids can take part in a scavenger hunt where clues lead them to different kinds of re-enactors where they will learn fun facts about 18th century life. Refreshments will be available for sale throughout the day such as the Wyman Tavern’s own Rhubarb Cooler, a refreshing (non-alcoholic) drink.

Jenna Carroll has observed that people often return to the festival again and again after their first year. In fact, some people who have attended are now volunteers. For example, a father-son team will be doing leatherwork. A family that attended last year will be back as re-enactors. The mother will be spinning wool, the father will be portraying a Unitarian minister, and they will bring their daughter who is in first grade.

The Historical Society of Cheshire County has been collaborating with re-enactors, traditional craftspeople, and musicians for seven years to build the Wyman Tavern Festival into a “destination” type of event that brings people to the community. The Historical Society has been collecting, preserving, and communicating the history of Cheshire County for 92 years. The Society puts on about 150 programs each year to help people of all ages “find their place in history.” Throughout the summer, the Wyman Tavern is open to the public for guided tours at 11 am and 1 pm each Thursday, Friday, and Saturday. 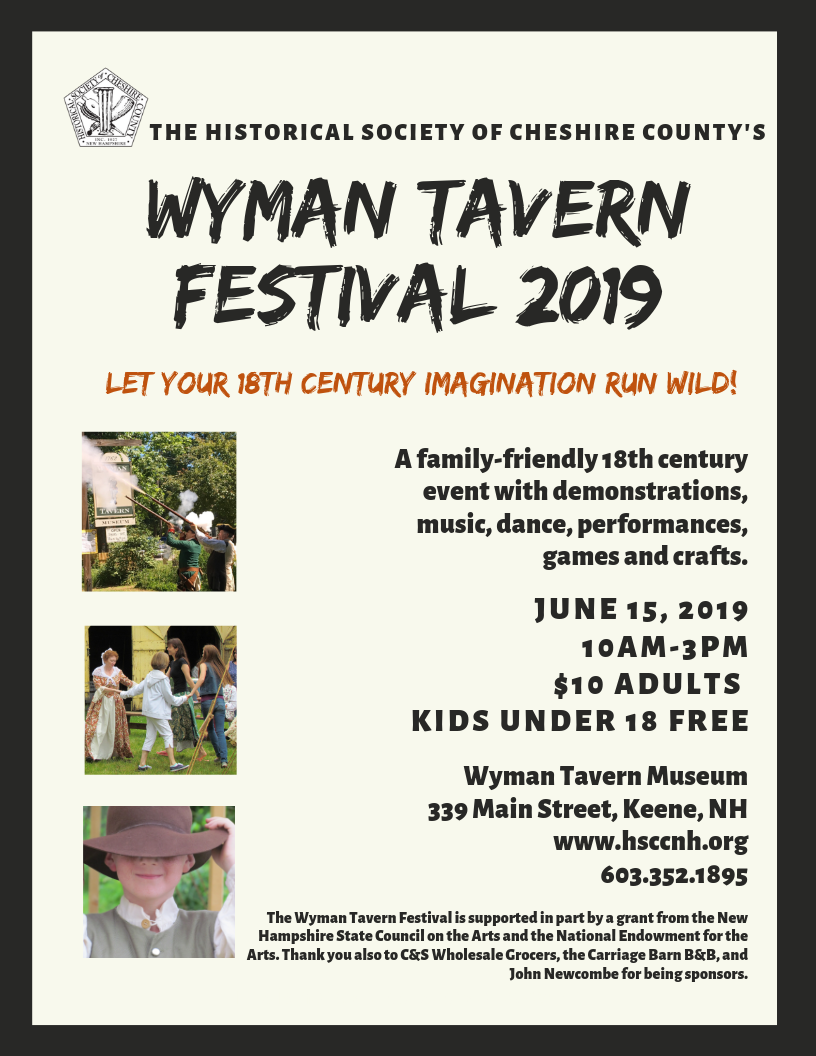 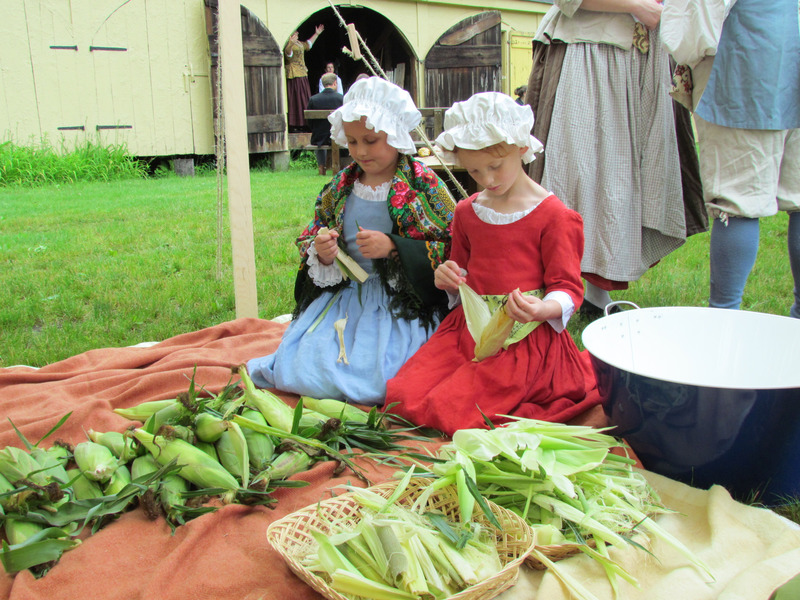 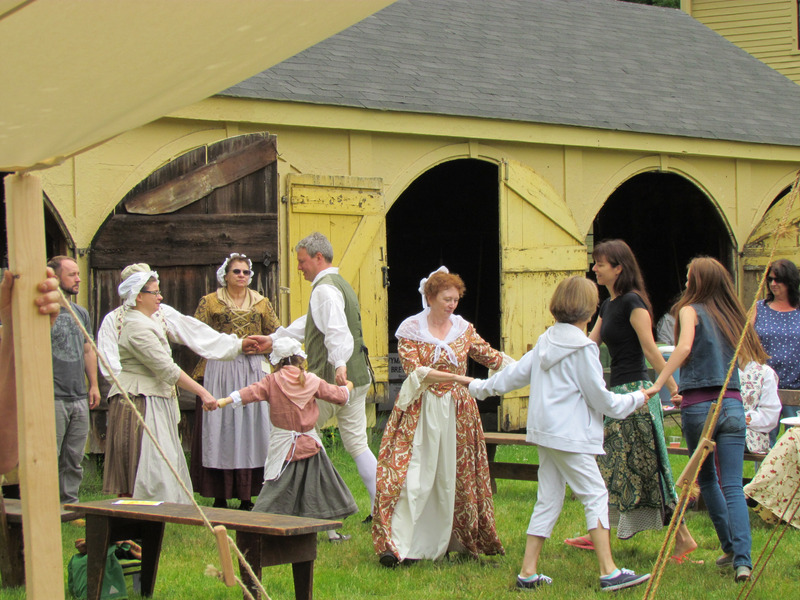 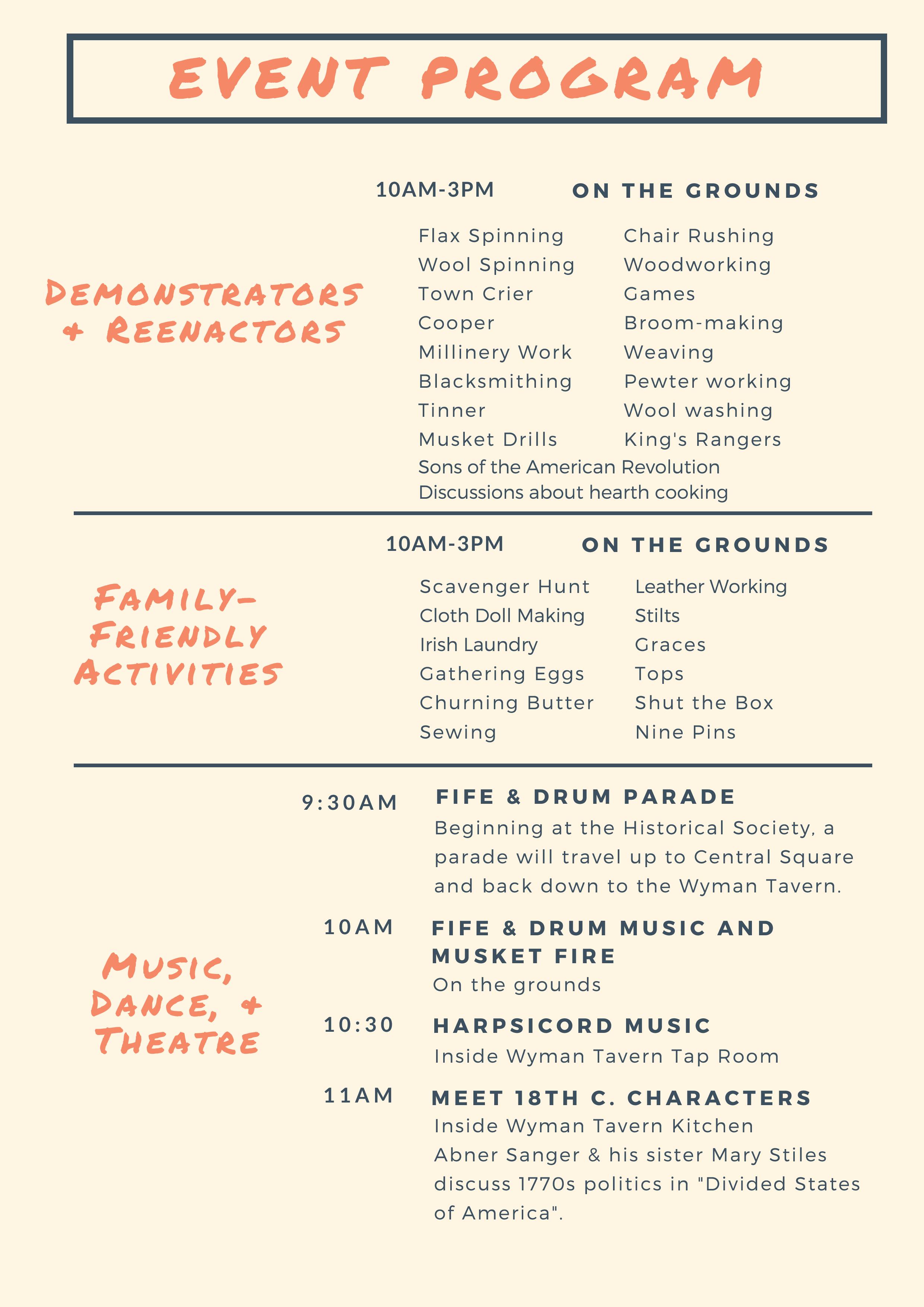 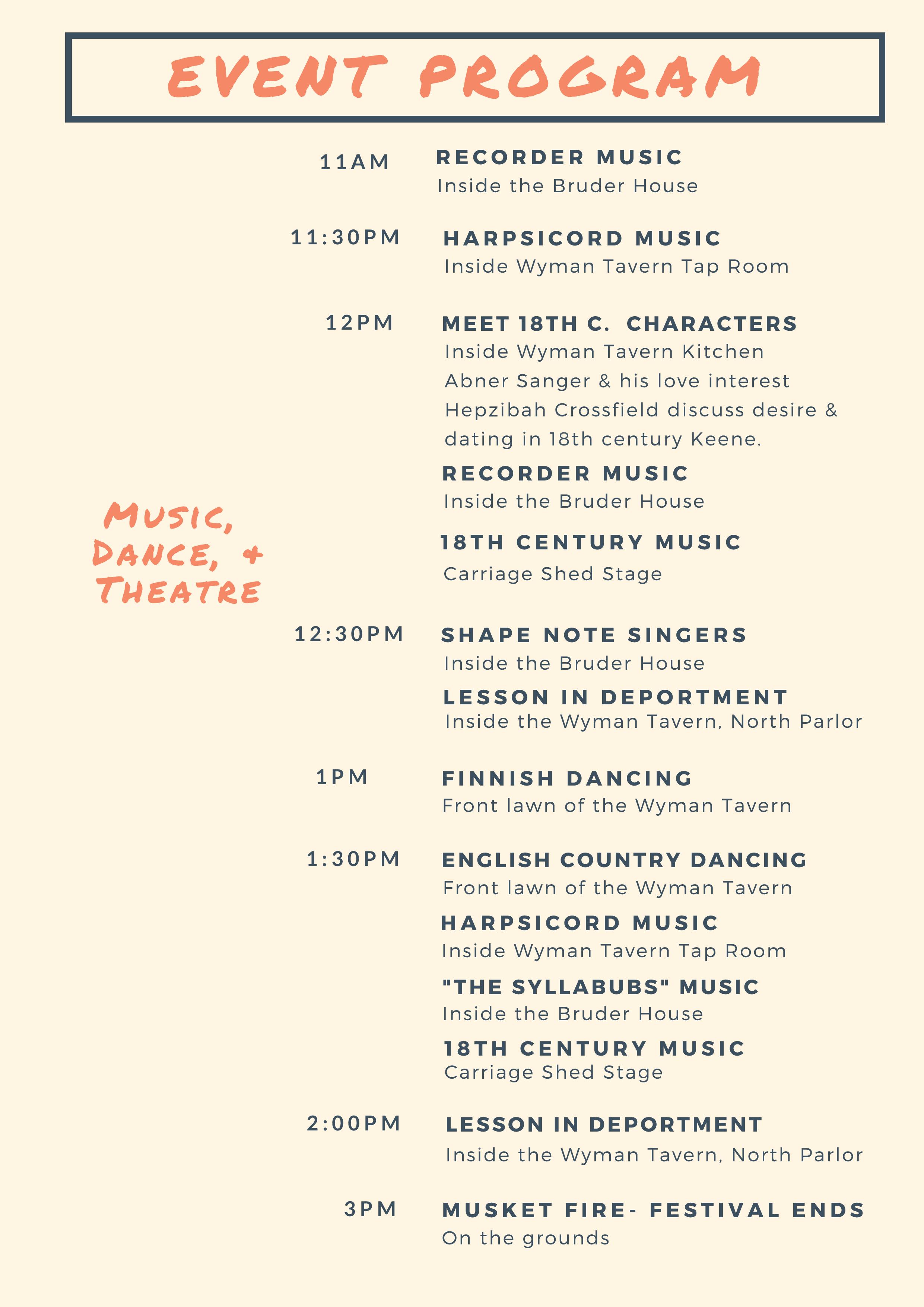 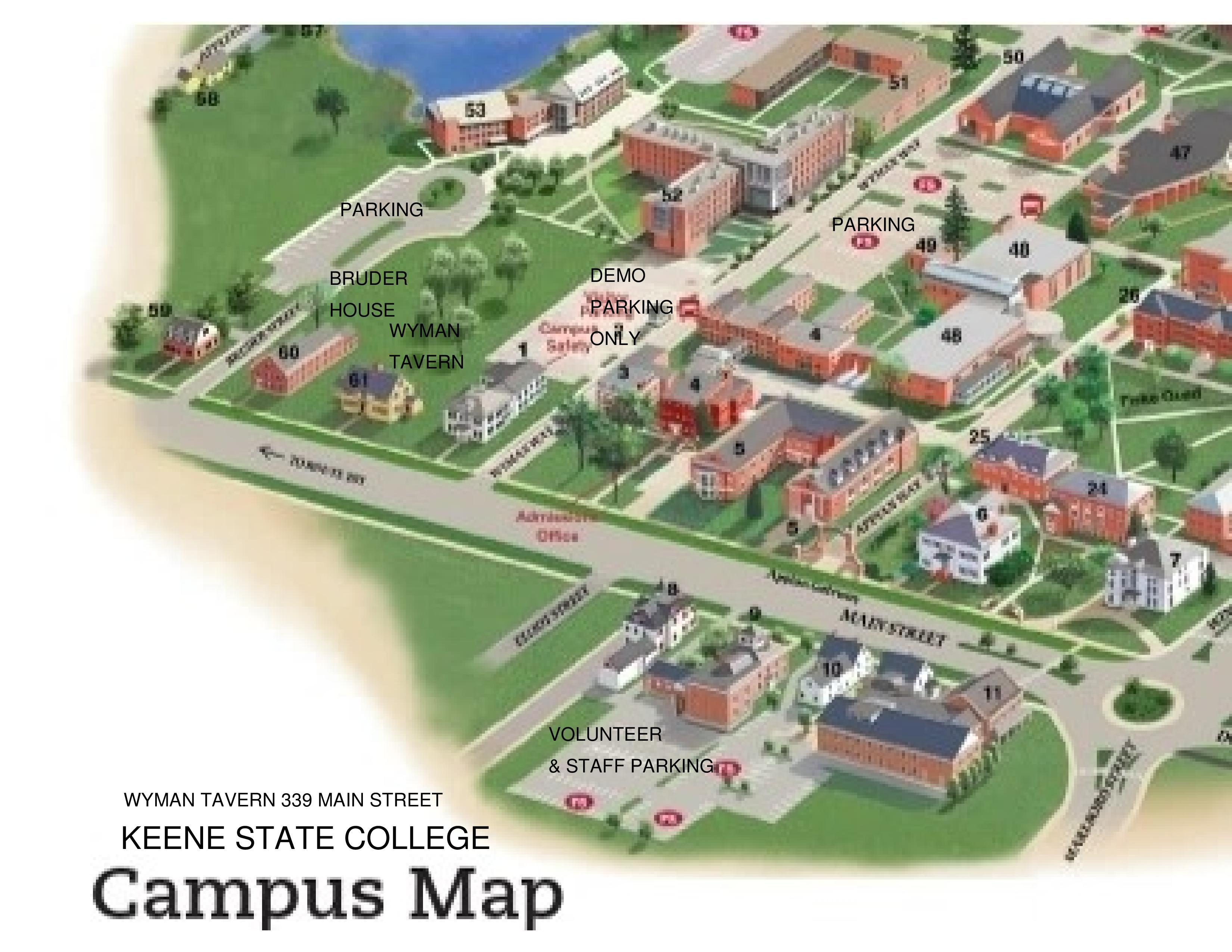