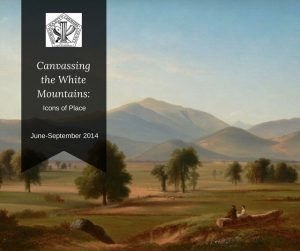 Showcasing important works by nineteenth and early twentieth century painters of New Hampshire’s White Mountains and Mount Monadnock, “Canvassing the White Mountains: Icons of Place” tells how the work of the artists impacted the growth and development of the White Mountain region.
Artists will include Benjamin Champney, Alfred Bricher, Asher Durand, John Enneking, Alvan Fisher, John Ross Key, Willard Metcalf, William Paskell, and a number of others. The exhibit will share how the painting styles of these artists illustrate not only the evolution of American art, but also how they helped to shape the American view of and reaction to wilderness and nature.

In the summer of 1850 three young American artists “discovered” North Conway Village in New Hampshire’s White Mountains.  Benjamin Champney, John Casilear and John F. Kensett were drawn to the mountains by the work of earlier landscape artists who had endeavored to capture the beauty, scale and foreboding ruggedness of the mountain landscape. Champney, a native of New Ipswich who had previously painted a “View of Keene, N.H.” in his home region, described the village and surrounding landscape as the most beautiful place on earth.
John Kensett made sketches throughout the summer for a panoramic painting entitled “The White Mountains – Mount Washington” which he completed in his New York studio during the winter of 1851. When the canvas was exhibited it was quickly recognized as the signature painting of the region and went on to become one of the most celebrated American landscapes of the 19th century. It was purchased by the American Art Union, engraved by James Smillie, and prints were distributed to more than 13,000 subscribers.  In 1860 Currier & Ives issued a print of the scene, thereby bringing the image into thousands of additional homes across the country.
Kensett’s painting became the best known American landscape of the period. His friend Champney noted that the painting became an advertisement for the White Mountains.  In 21st century terms, Kensett’s painting of Mount Washington had “gone viral.” Americans from coast to coast now personally understood the beauty and drama of the White Mountains. Furthermore, the mountains were accessible to a large percentage of the population and thousands of tourists came to New Hampshire to experience the mystery, drama and beauty of the mountains as well as the tranquility of the valley and village depicted in the scene. The painting became an icon of American art and Mount Washington itself became an icon of nature for the rapidly industrializing nation.
Another mountain far to the south of Mount Washington also became a geographic icon for the region that now bears its name – the Monadnock Region.  Mount Monadnock was a focal point for artists, writers and tourists by the mid-19th century. Monadnock itself was soon the subject of hundreds of paintings by well-known artists, some of whom were the same artists who were working in the Whites. The town of Dublin at the base of Monadnock became the site of an art colony that focused on the mountain.
A visit to the Historical Society of Cheshire County to view this noteworthy collection of art makes Keene an attractive destination for a summer excursion. The Society is located at 246 Main Street, just a short walk from Keene’s historic downtown district of shops and restaurants. The Historical Society also operates a period house museum on Main Street at the Wyman Tavern where visitors can walk into the eighteenth century and see what life was like when Captain Isaac Wyman’s family operated the building as a tavern 250 years ago.
It has been more than two decades since a detailed exhibit of White Mountain art has been mounted in the Monadnock Region.  The scope and quality of the works in this exhibit may be a first for the region.  The Historical Society is honored to be allowed to display these detailed and beautiful pieces for the enjoyment of art, history and nature enthusiasts from across New England.
Although the show will focus primarily on the White Mountain school of art, it will also include important paintings of the iconic mountain of southwest New Hampshire – Monadnock – thereby allowing contrast and comparison of the 19th and early 20th century art and history of these two widely separated regions of the state.   The paintings are visually stunning, but they also express fascinating commentaries on settlement, adventure, agriculture, industrialization, tourism, natural history, and conservation as seen through the eyes of the painters.  Their work had a major impact on American Art and New Hampshire history.