What is Jonathan Daniels known for?

In 1965, Jonathan Daniels answered Martin Luther King Jr.’s call for people of all faiths to travel to Alabama to participate in the Civil Rights Movement, fighting for the equal treatment of black Americans living in the south.

Growing up in Keene

Jonathan Daniels was born in Keene, NH on March 20, 1939.  His father was a popular doctor in town and his mother was a teacher.  The family lived on Summer Street and Daniels went to grade school in his neighborhood where he had many friends.

As a teenager, Daniels became very interested in theater, playing music, writing, and religion.  His friends remember that he was always kind to everyone. Daniels was often the first person to protect another student who wasn’t being treated fairly.

During high school, Daniels changed his religion from Congregational to Episcopalian. He became a member of the St. James Episcopal Church in Keene.  He also decided to go to military school after high school.

Before he joined the Civil Rights Movement

In 1961, Jonathan Daniels graduated first in his class from the Virginia Military Institute.  He thought often about what kind of job he wanted to do in the future.  Finally, Daniels came to realize that he was called to serve God and help people; he wanted to become a minister. He became a student at Episcopal Divinity School in Cambridge, Massachusetts. 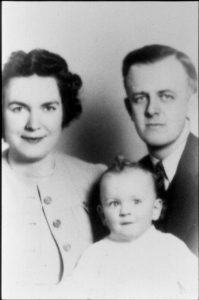 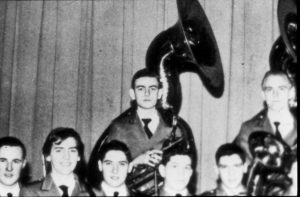 Childhood photographs of Jonathan Daniels with his parents and in school.

Jonathan Daniels was at school to become a minister on March 7, 1965, when he saw something terrible on the television.  Dr. Martin Luther King, John Lewis, and about 600 civil rights marchers were attacked by Alabama police officers with billy clubs and tear gas.   They had been marching from the town of Selma to the state capital in Montgomery to protest injustice towards black people in Alabama.  News cameras were there to videotape the violence.  Martin Luther King called on clergy of all faiths to come and join him in the fight for the fair treatment of all people.  Jonathan and his friend Judy Upham left immediately to help.

Jonathan Daniels traveled to Alabama in 1965 to assist Civil Rights leaders with voter registration efforts in the South, because people of color were not yet able to vote freely.  Daniels joined other civil rights activists in marches and demonstrations for voter rights in the South. He also worked to end poverty and to integrate local Episcopal churches.  He believed he had found what God wanted him to be doing– helping to end injustice. 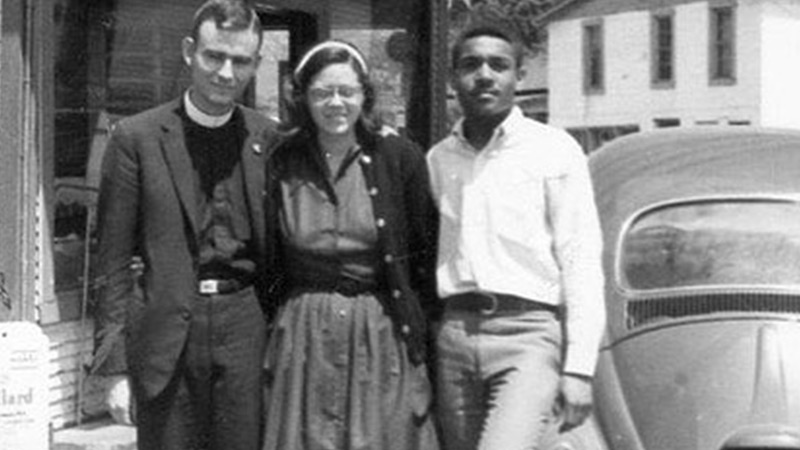 In August 1965, Jonathan Daniels and a priest named Father Richard Morrisroe were helping a group of young people who were peacefully demonstrating for equal justice in the town of Fort Deposit, Alabama.  Daniels was arrested along with 22 others.  They were taken to the county jail in nearby Hayneville in the back of a garbage truck.

Jonathan wrote letters to his family and friends describing the terrible conditions in the jail during that hot August week.  His mother feared for his safety, especially on August 20th when her son did not call home to wish her a happy birthday.  Her son had never missed her birthday.  What Mrs. Daniels did not know is that her son, Father Morrisroe, and a group of student activists had been suddenly released from jail that day.

How did Jonathan Daniels die?

Shortly after being released from jail on August 20, 1965, Jonathan Daniels, Father Morrisroe, and a few of the young activists went to a nearby store to buy sodas.  Included in the group were students Gloria Larry, Joyce Bailey, Jimmy Rogers, and Ruby Sales.  They were met on the steps of the store by Tom Coleman, a construction worker, and part-time deputy sheriff, who was carrying a shotgun. Coleman aimed his gun at 16-year-old Ruby Sales; Daniels pushed her to the ground in order to protect her, saving her life.

The shotgun blast killed Daniels instantly; Coleman then shot at Father Morrisroe who was seriously wounded. Gloria Larry remembers running through the neighborhood knocking on doors to beg for help.  Nobody answered their screams.  After a long while, an ambulance came to take both Daniels and Fr. Morrisroe.  The teenage girls waited alone for friends to come to find them. 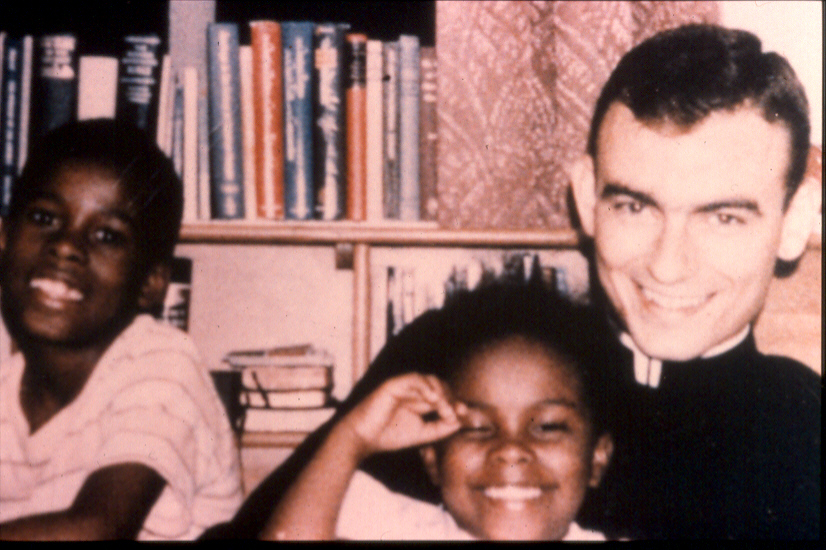 Jonathan with the West family in Selma, Alabama, 1965.

News of the shooting was reported on televisions and radios across the country.  President Lyndon B. Johnson was informed.  When he heard of the tragedy, Dr. Martin Luther King, Jr. said, “One of the most heroic Christian deeds of which I have heard in my entire ministry was performed by Jonathan Daniels.”

At Coleman’s trial, an all-white jury found him not guilty, saying he acted in self-defense after Coleman claimed that Daniels had a knife, though no weapon was ever found. A year later Coleman said in a CBS interview that he had no regrets, declaring “I would shoot them both tomorrow.”

The deaths of so many Civil Rights activists, like Jonathan Daniels, helped awaken the country to the violence occurring against those who peacefully fought for civil rights and against discrimination.

How is Jonathan remembered today?

In the years since his death, Daniels’ selfless act has been recognized in many ways. Five books have been written about his life, and a film was produced in 1999. A Daniels memorial has been built in Hayneville, Alabama, and a limestone sculpture of Daniels has been created inside the Washington National Cathedral.

People in the Episcopal Church who had stayed silent on civil rights became more outspoken. Today the Episcopal Church honors Jonathan Daniels every year on August 14, the day he became arrested, and Daniels name is among the fifteen honored in the Chapel of Martyrs in England’s Canterbury Cathedral. In his hometown of Keene, a school is named after him and a mural is painted on the wall near the church he attended. 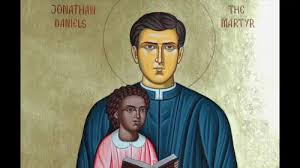 August 14th is the feast of Saint Jonathan Daniels in the Episcopal Church.

Discover more about Jonathan Daniels with these historical resources. 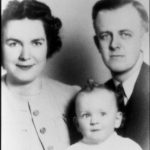 Baby Jonathan with his mother and father 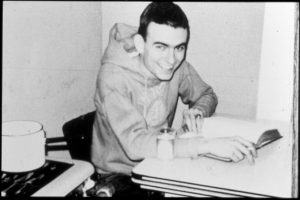 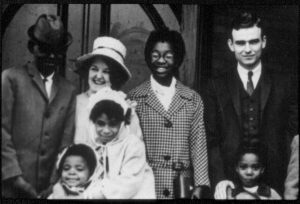 Jonathan Daniels attending church in Selma, Alabama while working to end voting discrimination and segregation in 1965.