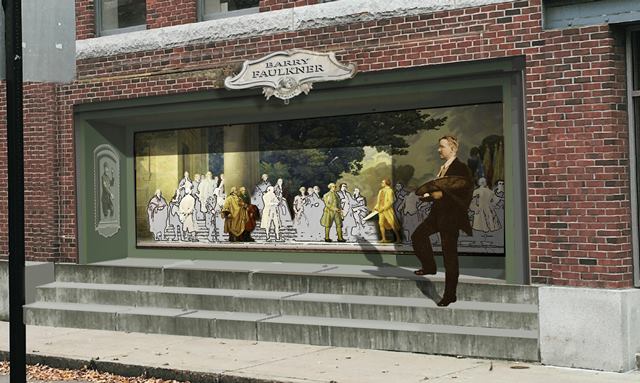 Barry Faulkner (1881-1966) was born and raised in Keene, NH, and became one of the foremost mural artists in his generation.

As a teenager, Faulkner studied with his older cousin and famed artist Abbot Thayer at Thayer’s home in Dublin, NH.  Inspired by art, he left Harvard University after one year to study and travel to Florence, Italy, with Dublin artist George de Forest Brush. Later at Cornish, N.H, Faulkner worked in the studio of Augustus Saint-Gaudens, America’s leading sculptor. In New York he studied at the Art Students League and Chase School, and in 1907 Faulkner won the Rome Prize Fellowship to the American Academy in Rome to study ancient art and architecture. Upon his return to the United States, he set up a studio in New York City where he built his career in mural painting.

Barry Faulkner murals can be seen around the United States with many examples of his work still in Keene.

Note about the mural:  The mural on display in downtown Keene depicts Faulkner as a young muralist painting a mural about the signing of the Declaration of Independence. It is portrayed as a work-in-progress.  The mural’s designer, ___, conducted his own research on Faulkner and became very interested in his work as a camoufleur.  Barry Faulkner found inspiration in his cousin, famous Dublin artist and naturalist Abbott Thayer, who was famous for his studies of birds in relation to protective coloration (camouflage).  Faulkner went on to serve in the camouflage unit of the US army during World War I.

One of Faulkner’s last murals painted,  The Advent of the Coming of the Railroad, was completed at the age of 74.  Barry Faulkner died at Keene in 1966 at the age of 85. 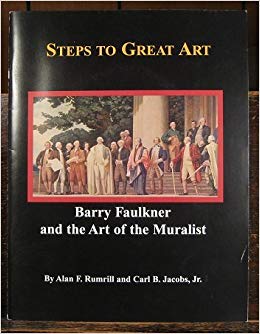 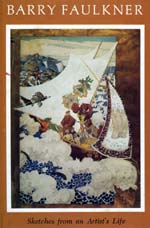