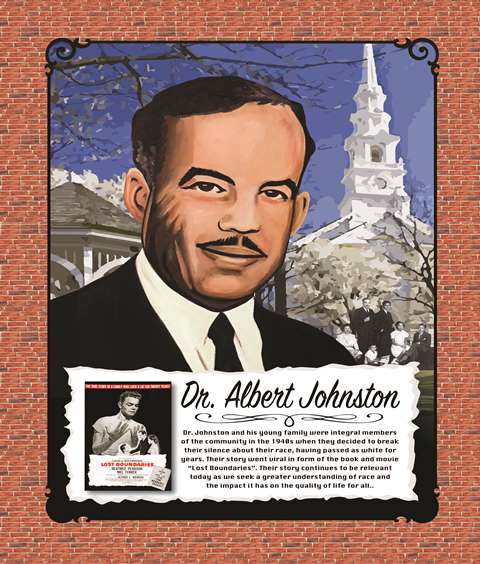 Originally from Chicago, Dr. Albert C. Johnston was a highly respected radiologist in Keene between the 1940s and 1960s. He, his wife Thyra, and their 3 sons and 1 daughter lived on Washington Street. During World War II, Dr. Johnston’s commission as a medical officer in the Navy was rescinded by the government without .  After about two years of seeking an answer as to why, Johnston finally learned that a background check had shown that he was of mixed racial background. While other branches of the military were integrated, the Navy was not yet desegregated.

Dr. and Mrs. Johnston were one of many African-American couples in the mid-20th century who had made the difficult decision to ‘pass’ as white.  To keep their secret safe and protect their family, the Johnstons had chosen not to discuss the issue of race with their four children– Albert Jr., Anne, Donald, and Paul.  After his disheartening rejection from the Navy, Dr. & Mrs. Johnston chose to expose their race to their friends and children. Each of the four children handled their new identities in different ways as they grew up.

While studying music theory at the University of New Hampshire, Albert Johnston Jr. (eldest son) met Hollywood film producer Louis de Rochemont to pitch an idea for a film on George Washington Carver.  What resulted was the development and creation of a bestselling novel about the Johnston family by William Lindsay White in 1948 entitled “Lost Boundaries.” A Hollywood film of the same title premiered in 1949 and was a critical success. The film of Dr. Johnston’s story, and that of Keene, is considered a groundbreaking film in the history of racial equality in the United States.

Following the craze of Lost Boundaries, the family continued to live and work in Keene until 1966, when Dr. and Mrs. Johnston relocated to Hawaii with their sons Albert Jr and Paul.  Descendants of the Johnstons live in Massachusetts and continue to visit Keene on occasion.