An End to Innocence: Cheshire County in the Civil War 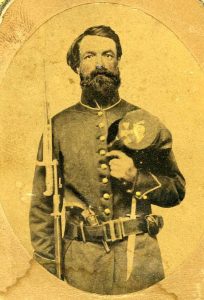 In Cheshire County 150 years ago men went off to fight a war in their own country to preserve the union. Many came back with gruesome wounds or in coffins, and many never returned to the difficult farmland of New Hampshire. [more info]
An exhibit featuring the Civil War opens in December at the Historical Society of Cheshire County. “An End to Innocence” will tell the story of Cheshire County’s involvement in the Civil War 150 years ago. There will be an opening reception for the exhibit on Friday, December 5th from 4:00 to 6:00 pm.
The exhibit includes more than 100 artifacts, photos and manuscripts that illustrate the story of the region’s role in the conflict. There is much more to the story than tales of battlefield heroics. Almost every family had a friend or family member in the military. Troops trained in local towns, industries produced military supplies, taxes were collected and aid societies formed to support the war effort. Local residents followed the military news closely in their local newspapers and photography made the war more immediate than past wars had been. The war influenced politics, technology, the economy, and many other aspects of life throughout the 1860s and beyond.
“An End to Innocence” will be on display at the Historical Society of Cheshire County at 246 Main Street in Keene from December 6, 2014 through March 27, 2015. During the exhibit’s run the Historical Society will offer several programs connected with the Civil War. The public is invited to bring in a Civil War related object to share at the Society’s next Pop Up Museum-“Civil War”, which takes place on January 7, 2015, at the Colony Mill Marketplace from 6-7pm.  Come explore the Civil War through the lens of period music as Woody Pringle and Marek Bennett share the story behind camp songs, parlor music, hymns, and battlefield cries on January 21st at 7pm.  On February 23rd, New Hampshire author Bill Marvel will talk about his upcoming book, also entitled The End of Innocence, about Cheshire County’s involvement in the Civil War, scheduled to be released that day.