Icons of the Civil Rights Movement 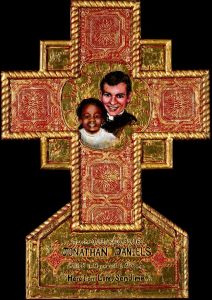 Icons of the Civil Rights Movement, commemorating those who played roles in the history of the Civil Rights Movement in America. Pamela Chatterton-Purdy’s artwork depicts thirty iconic figures of the Civil Rights Movement in gilded wooden frames in a style reminiscent of the icons of the Eastern Orthodox Church.  [more]
One of the Civil Rights martyrs who is depicted in the Icons exhibit is Jonathan Daniels, who was born and raised in Keene. Fifty years ago, Jonathan Daniels was shot by a deputy sheriff in Hayneville, Alabama while attempting to enter a store with a Catholic priest and two young African American women.  In the Icons exhibit Jonathan Daniels is remembered alongside well-known historical figures such as Dr. Martin Luther King and Rosa Parks.
The exhibit’s creator, Pamela Chatterton-Purdy, says that her work has been inspired by “the enduring tolerance and work that the Holy Spirit does for justice.” She hopes that her paintings are capable of being windows to God. Her paintings recall important historical events such as the “sit ins” at Nashville lunch counters, the children’s campaign in which fire hoses were turned on children, the torture and murder of fourteen-year-old Emmett Till, and Jonathan Daniel’s heroic act of pushing a young woman out of the line of fire and taking the shotgun blast himself. Chatterton-Purdy says, “These people rose above horrible evil and terrible assassinations, lynchings, murders, and they chose nonviolence and the path of transformative love.”

The opening reception for the Icons exhibit will begin at 4 pm on April 10th. Animaterra Women’s Chorus will sing at 4:30 pm,  and the artist Pamela Chatterton-Purdy will make a presentation at 6 pm. Chatterton-Purdy will be welcomed by a number of local organizations whose sponsorship has made the exhibit possible: the Coalition of Churches and Arts; St. James Episcopal Church of Keene; Federated Church of Marlborough; Parish of The Holy Spirit and Mary, Queen of Peace Roman Catholic Parishes; United Church of Christ of Keene; Keene State College; the Martin Luther King/Jonathan Daniels Committee; and the City of Keene.
Icons of the Civil Rights Movement will be on display at the Historical Society of Cheshire County, at 246 Main Street in Keene, from April 10-May 10, 2015. The Icons exhibit at the Historical Society will also feature artifacts celebrating the life of Daniels and his work towards racial equality in the 1960s. The exhibit comes to Keene after a two-month run in Greenwich, Connecticut, where it was featured in a story by the New York Times. Its next stop will be in Hyannis, Massachusetts in May.