Gnomes vs. Flamingos: A Brief History of Lawn Ornamentation 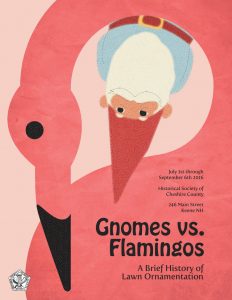 In a salute to our decorative impulses, the Historical Society of Cheshire County presents a showcase of lawn art from the late 19th century through today. The “Gnomes vs. Flamingos” exhibit features approximately 120 individual pieces of ornamentation and 45 photographs of figurines, plastic creatures, metal objects and other artifacts that bring life to front lawns. Anyone who believes that lawn art is only about shiny reflecting balls on pillars will be corrected here.
The display, in the exhibit room of the Society’s Ball Mansion headquarters, is built on lawn ornaments loaned by 30 individuals and businesses in 15 different communities in New Hampshire, Massachusetts and Vermont. The items on display range widely in size, color and materials that include glass, polyresin, plastics, concrete and crushed granite.
The exhibit focuses the eye on different periods of lawn ornamentation – for example, a Victorian age of garden gnomes and a mid-20th century fenced yard populated with figurines. As for gnomes and flamingos after which the exhibit is named, they’ve been given their own corners of the room in recognition that they don’t always get along.
Special guest artist for the show is photographer Medora Hebert of Westmoreland who spent months photographing lawn ornaments throughout New Hampshire and Vermont. Also on display are the works of contemporary artist and metalsmith Bob Taylor of Alstead and chain saw carver Peter Auchmoody of Bellows Falls.
The idea for this unusual exhibit is credited to two Historical Society staffers who, on an afternoon walk in downtown Keene last year, took note of yard ornaments that were displayed outside the florist shop In the Company of Flowers.
The Historical Society mounts a handful of major exhibits every year, among its many other activities. “Gnomes vs. Flamingos” represents its first study of lawn art.