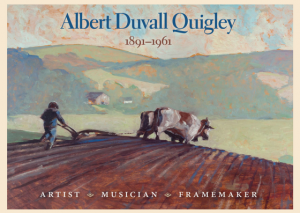 Albert Quigley lived in the small New Hampshire hill town of Nelson for almost three decades, from the 1930s to the 1960s. Towns such as Nelson were struggling to survive as the Depression caused economic hardship, agriculture and industry died out, and small towns off the beaten path were searching for new identities. Quigley’s paintings of the region’s landscapes and people illustrate this story of hardship, rebirth and revival in the mid-20th century. He was much more than an artist, however. Quigley wrote music, played the fiddle at local dances and repaired musical instruments. He worked in the textile mill in neighboring Harrisville and made frames for his own paintings and for the artwork of others. Although his art did not make him a rich man, Quigley’s life was filled with rich experiences and he enriched the town of Nelson and the Monadnock Region through his art, music and connection to the community. This exhibit will celebrate his art, his life, and his artistic depiction of a now vanished place and time.