Identity and Race in 1940s Keene 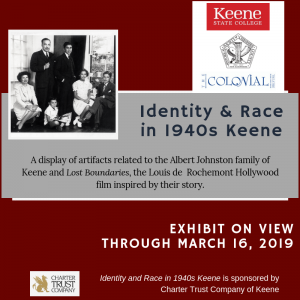 The story of a radiologist who, after years living as a white person in New Hampshire, including in Keene, tries to join the military during World War II but is rejected after being designated an African-American, is the subject of a local historical exhibit.

The Historical Society of Cheshire County partnered with the Mason Library Archives at Keene State College for the upcoming exhibit about the late Dr. Albert Chandler Johnston, who with his family, was the subject on which the film “Lost Boundaries” is based.

The movie, which is also based off a book by the same name by William Lindsay White, is considered one of the top 10 films from 1949, and won at the Cannes Film Festival for best screenplay, according to a historical society news release.

The Johnstons moved to Keene in 1940, where Johnston was a radiologist at the Elliot Hospital, and hospitals in Peterborough and Bellows Falls. Born in Chicago, Johnston graduated from the University of Chicago and completed his medical degree at the Rush Medical School. He interned at the Maine General Hospital and then set up a general practice in Gorham, while completing training in radiology at Harvard.

The exhibit, “Identity and Race in 1940s Keene,” featured a collection of artifacts and materials from Johnston and his family and items from Louis de Rochemont, producer of “Lost Boundaries,” who lived in Newington, NH, according to the release.

Charter Trust Co. is sponsoring the exhibit and the presentation.